Racial segregation is the most harsh of all forms of segregation, and it’s been the most difficult to overcome. Recent unrests following the shootings of Michael Brown in Ferguson, MO, and Trayvon Martin in Sanford, FL, have reignited the smoldering tension between races.

Start With Where You Live

Neighborhoods
Our neighborhoods have become some of the most segregated in society. A report by AlJazeera America finds that “despite a decline in racial segregation and improvements in incomes marked by the rise of the black middle class, blacks and Hispanics continue to live in the least desirable neighborhoods — even when they can afford better — and their children attend the lowest-performing schools”[El Nasser]. Many people today choose their neighborhood based on the racial makeup of that neighborhood. Black, White, Hispanic, etc., all choose a neighborhood where they will feel comfortable. American suburbs are some of the most racially segregated areas in American life. However, we can take steps to introduce more diversity in our neighborhoods.

We may not be able to move to a monocultural neighborhood to introduce diversity, but we can become friends with others in different neighborhoods. We can become friends with those who are different from us and start building a cultural bridge between us and our families. Segregation is hard to change and change won’t happen all at once. Time will be needed for racial divides like this to start shrinking.

Schools
Our schools are also heavily segregated, and this comes as a byproduct of living in heavily segregated neighborhoods. The New York Times reported that, “43 percent of Latinos and 38 percent of blacks attend schools where fewer than 10 percent of their classmates are white” [Rich]. In order to break these boundaries of racial segregation, relationship must occur between the minority and the majority. Typically, high school (or any school) is a difficult place to step out and do something different. However, in order to defeat racial segregation while steeped in it, one must be willing to take a stand and create relationships where none existed. In these schools that the New York Times reported on, the stigma of racial segregation is slowly disintegrated as relationships form between Black and White and Hispanic.

Churches
Our churches also run along these same lines. A lot of us go to churches that are found in our neighborhoods or within neighborhoods where we feel comfortable. We pick churches based on their segregation. However, as we’ve been discussing this month, there are plenty of ways to seek out cultural and racial diversity outside of our church walls. This may come as no surprise, but the main way we do so is that we choose to take initiative and create relationships where there were none previously.

You’re sure to be seeing a trend here in the solution to defeating racial segregation. That trend, and really the only solution, is to begin building relationships with those who are unlike you. This can be scary and it can be difficult. However, there is no other method of loving our neighbor. To effectively live out Christ’s command to love our neighbor as ourselves, we must choose to be in a relationship with our neighbor. Just like the only way to truly love God with all our heart, soul, mind, and strength is to establish a relationship with YHWH.

Racial segregation is still deeply embedded in American culture, but it doesn’t have to stay that way. When we as Christians grasp ahold of Christ’s command to love, we begin the process of defeating racial segregation in our local contexts. That will then spread throughout America and the world. Let’s start building relationships today with those who are racially and culturally different from us to see Christ’s desire of a multicultural unity in worship occur in our lifetimes. 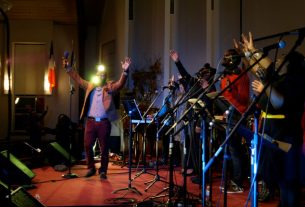